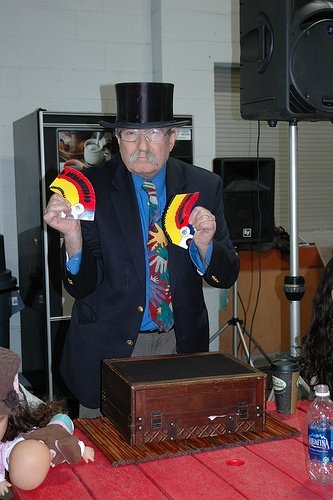 How Did Magic Marty Get Started?

When I was eight years old, the city of New York paid professional entertainers to visit its local Borough Parks during July and August and entertain the children of surrounding communities.

I was so excited that I arrived with my mother at 10:00 — when the park opened for an 11:30 show. Well, the show was great… but the magician gave me very little time. He told me to visit my library.

Good advice for a child today as well.

That same day, I went to the library and took out the one and only magic book they had. Houdini, an autobiography. Inside the back cover was a business card for Tannen’s Magic, in downtown New York City. I finished the book and started saving for a trip to the city.

Three years later and with $55.43 in my pocket, I made my trip to this magic temple of real magicians.

Lou Tannen would not sell me magic, only a book: Tarbell’s Course in Magic #1. I now own the entire set of eight books; it turned out to be one of the best investments I ever made.

Mr. Tannen also suggested I visit a magician for a magic lesson. He called and set up the appointment, with a magician who appeared on the Ed Sullivan show a few times. The Great Slydini.

I got 2½ hours of lessons instead of the standard 30 minutes. I’ve never had the opportunity to repay him, but Mr. Tony Slydini really set me onto this life’s path.

Here I am, 73 years old and still performing the art I love most!